Fourth post for Deaf Awareness Month! Another mini history lesson, enjoy! Before we start today, I want to remind you that if you want to see me talk about a certain topic or anything, let me know so I can have time to figure out something before this month ends. Now, let’s get going. A lot of information today! Quick reminder: today’s the 19th, which means it’s the first day of International Week of the Deaf. That’s all, moving on. 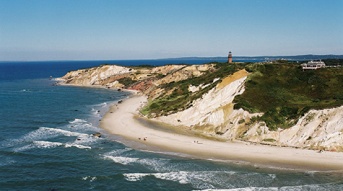 Today we’ll be talking about two key things in Deaf history. Starting with Martha’s Vineyard, a “Deaf Utopia,” the perfect world for Deaf people. Martha’s Vineyard is an island off the coast of Massachusetts that was settled a long time ago. Many of the early settlers carried the gene for deafness. Over the years, with generations after generations being born, many deaf people were born. At one point, there was one out of four people born deaf! That’s a pretty high percentage! On Martha’s Vineyard, there were so many deaf people, mostly in one town called Chilmark. Many deaf people lived on that island, so many that they developed their own sign language, Martha’s Vineyard Sign Language (MVSL). The whole island used MVSL, so communication was never an issue for deaf or hearing people. If people moved to Chilmark, they were required to learn sign language so they could be part of the community. Being deaf was so common there, it was never seen as a handicap, or lower-than, or a disability. They were always considered and seen as equals. It was simply a different way of life, a different way of communicating. Unfortunately, nowadays, most of MVSL is gone because back then when it started to grow, American School for the Deaf was established and many deaf people started moving to the mainland, so MVSL faded out. But! It’s not all 100% gone. It has a legacy. When ASL was being created, it mixed LSF (French Sign Language), MVSL, and home signs. [Edited: Along with Plains Indian Sign Language, British Sign Language, and others.] Some signs today are still from MVSL. That’s a really, really short history of Martha’s Vineyard. There are several links below the video [beginning of post], so if you’re interested in reading more, seeing more information about it, check them out.

Moving on from Martha’s Vineyard, now I want to tell you about a key point in Deaf culture and history. It happened in the year of 1988: DPN, Deaf President Now! I’m sure some of you are going, oh yes, I already know this! You should, if you’re very involved in Deaf culture. This is a pretty big part of Deaf culture, also one of the key points in general history, really. What is Deaf President Now, DPN? It was a student-led protest that lasted over a week at Gallaudet University. The protest was about a hearing person being selected as the president. To be clear, this rally was not a small one. Over 1,000 students (university, high school, elementary), faculty, staff, and the Deaf community were involved. That’s a lot! The first rally was getting people to think about having a hearing person candidate for Gallaudet presidency, aren’t we tired of it always being a hearing person, this is enough, we need to have a Deaf president, this is a Deaf university, come on! So, students started camping out in the front of the president’s home, on the lawn. They were saying, we want the hearing candidate to withdraw their candidacy for being the president of Gallaudet. The spark that ignited the real protests happened on March 6, 1988. The spark happened when the board of Gallaudet announced that they had selected the hearing person, Elisabeth Zinser, to become the president of Gallaudet. Now, the reason for the anger was before this date, the deaf community had already told the board that they wanted a Deaf president, and they STILL selected a hearing candidate. The deaf community already told them that they wanted a deaf president, and still selected the hearing person. A big reason why this was a disappointment was that they had three candidates to be president. The first was Zinser, who’s hearing. The other two were deaf. So why not pick one of those two? They still picked the hearing one? Come on. The board had selected the hearing person despite requests otherwise, so the students went ahead and protested. They drove school buses and parked them in front of the school entrance, let the air out of the tires, and closed down the whole campus for a few days. They told the board that they had four demands that have to be met, before the protest is ended. After a while of protesting, the demands were met, and the students got a victory. By the end of that week, they announced the new president of Gallaudet – I. King Jordan. The eighth president, and first Deaf president of Gallaudet. Again, this is a really summarized history of DPN. Not very detailed, but I wanted to give the basics. If you’re interested and want more information, there are a few links in the video’s description. There’s plenty of info out there about it. There’s even a video of the protest itself, speeches, and so on, it’s really good. I encourage you to watch it.

I hope you enjoyed learning a little bit of history about Deaf culture and Deaf people. I want to remind you again, today is the first day of International Week of the Deaf. There’s plenty of other people making videos for this week, also Deaf Awareness Month. I will link two that I know of for sure, Rikki Poynter and ASL Stew, in the description. If you know of anyone else who’s doing videos for this month, please let me know and I will add them in the description. A lot of links today! Ah well, that’s what happens when you give a little history lesson. Anyway. I want to remind you if there’s a topic you want to see, seriously let me know. I will look over it and do something, if I have the time to do it before this month ends. And… I will see you next time!