I really tried to break the alternation of queer (and/or ASL Ponderings), and books, but… Oh well.

Hello and welcome to a wrap-up. I will TRY to make this short but we’ll see. (Ha, it never happens.) I’ve decided that I need to be more consistent about WHEN I post wrap-ups of what I’ve read. So from now on, I will be doing end-of-month wrap-ups. I will try anyway. So! I have nine books today. Let’s get started!

How to Survive a Garden Gnome Attack. This is funny. It’s kind of a parody book. I enjoyed reading this. It’s a very quick read, maybe a hour. If you’re a fast reader, maybe a hour. It’s not even that thick. It’s written like a “how to survive a zombie apocalypse,” that kind of thing. So this is pretty funny. It will talk about garden gnomes like they’re alive and have very murderous intent. It’s a funny little book, I enjoyed it.

Next, The Partner. It’s basically about a guy who worked for a law firm, and stole money from them, disappeared for ~4 years. They looked for him, couldn’t find him. The law firm that he worked for went broke, all the partners spent the money before they even had it. There’s a lot, but at the same time, not a lot going on in this story. It jumps back and forth a lot. It kind of pieces together the story as you go, it doesn’t tell you from the beginning to now, no. It starts now, jumps to back here, then forward to now, a little back, now, far back. It can be a little confusing sometimes, but overall, it is good. It’s a Grisham book, I enjoy his books. *shrugs* It was good.

Next, Queer by William S. Burroughs. I gave it three stars on GoodReads. Partly because it was just very confusing. I’m just going to read the synopsis on the back of the book, because I’m not even sure how to explain it. Set in Mexico City during the early 50s, Queer follows William Lee’s hopeless pursuit of desire from bar to bar in the American expatriate scene. Yeah… It was interesting, but very confusing. The writing style is very different than modern books, so… It’s not something I would say you must read. It’s okay if you… Yeah, I don’t know. 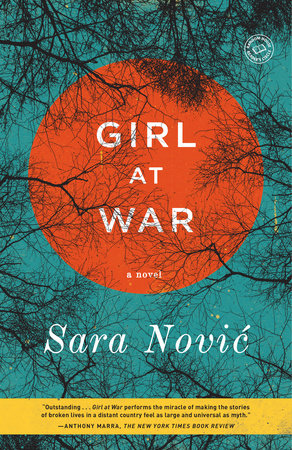 Next, Girl at War by Sara Nović. A couple things. One, I already kind of explained this story in a collab I did recently. I’ll link that here. Second thing, the author is deaf. Now, this book has only one deaf character in it, as far as I know, and it’s a minor character. But the story itself is good. It’s about a girl who was born in Croatia and grew up during the downfall of Yugoslavia. Then at about 11 years old, she was sent to the US to live there. She grew up, became an adult there. She started to have flashbacks, struggling with her life. So she decided it was time to go back to Croatia and reconnect with her roots. It’s really good. It does touch on war, violence, trauma, so be aware of that if you need to prepare yourself for that.

Next, Creative Struggle. If you know Zen Pencils, you will know what’s in this book. It’s pretty much his comics from online put into book form. (Not all of them, just a select few.) So if you read online, there’s nothing new in this. It has different comics about famous people like Tesla, Einstein, Akira Kurosawa (a filmmaker), Mary Shelley (the author of Frankenstein). All different masters of creativity, and the comics are about their own struggle. Many people will look at them and go, “They’re brilliant, good at what they do, they never struggle.” But the comics say no, really, they did have their own struggles that they had to get through before they became skilled/good. I really liked how Gavin, the cartoonist, did this. He drew it as if the person themselves was telling the story. After each comic, he will have text about that person, what their history is, maybe more details about their accomplishments, and why it’s important to know about this person. It’s really interesting, I liked it.

Next, The Orchid Thief. Basically, the story is about orchids and trying to figure out WHY people are so obsessed with them. This started as a New York Times article, then the author decided that she wanted to expand to a full book, maybe. So she went to Florida, everything happens in Florida. She follows one person who is obsessed with ghost orchids. He wants to get one, and clone them to sell everywhere. Because they’re hard to get, they’re in the wild, only in Florida, they don’t grow anywhere else. It’s an interesting story, yeah, and I did learn quite a bit about orchids in this. I gave it three stars on GoodReads, because it wasn’t anything that hit me and made me go, “Wow, this is really fascinating!” It was an interesting story, yes, but not anything special.

Next, Winter. This is the fourth, and final, book in the Lunar Chronicles. If you remember from my previous videos, I’ve read all four – Cinder, Scarlet, Cress, and now Winter. I really enjoyed reading Winter because we got to learn more about Luna, and what the author imagines what life is like on the moon, and the people who live there. It was interesting. It was good, still has a little bit here and there that felt a little bit convoluted. But…overall, the series is good. I enjoyed reading it. I enjoyed seeing the alternate possibilities of all these fairy tales. Winter is obviously based on Snow White, just looking at the cover. But I’m not going to say anything more because this series is one of those you have to read in order, they’re not stand-alone novels. So let’s get to the next one.

Next, Piper. I… *winces* I don’t like this one. I don’t. To be clear, this book is a graphic novel, so that’s different from a book. This is a re-telling of the Pied Piper. Simple and basic. But I really didn’t like it because… It has a deaf character in it, a main character other than the Piper. But I felt like the deafness was used as a plot device, and the whole story felt kind of forced, and… The way it was written was kind of all over the place, it felt choppy, jerky, it didn’t feel natural at all. So… I gave it two stars on GoodReads. Yeah, I wouldn’t recommend this book at all.

Next book, I started and finished in maybe four hours: Mr. Penumbra’s 24-Hour Bookstore. This was recommended by Kathy, and the minute I saw it, I knew I had to get it and read. I mean, a book about a 24-hour bookstore, books, mystery, and all of that? Yes. Yes, please. I decided, fine, I’m going to the library, get it, because I found out my library has it, yes. I got it… and I think I may have to get my own copy. Anyway! This story is about a guy who recently lost his job, his career goals didn’t really pan out, so he’s looking for a job. He happened to find one at Penumbra’s. He thought, sure, why not?

It’s a good temporary job for now. And of course, things get weird. And get weirder, very fast. This has a good mix of old-timer, books, a bookstore, and tech with Google, 3D models, and all of that. While I was reading it, I used a specific bookmark to hold my place that has flying books on it. I thought it was appropriate. A book bookmark in a book about a bookstore and books. What can get better than that?

Also, for those who don’t know sign, the book has a symbol that is mentioned frequently in the book. It also has a picture as shown here. That’s the end of the sign for book. So…I don’t know if that was the author’s intent or not, but I thought that was a cool tidbit. Oh and of course I want to add this! A really cool thing with this book cover is it glows in the dark. That’s really cool! I would definitely recommend this read.

That’s it for today’s wrap-up. Have you read any of these books? If so, did you like them or didn’t like them? Let me know in the comments!