I read one extra book just because I could!

Hello and welcome to the Contemporary-a-thon wrapup. If you watched my TBR, you’ll know that I was unsure about getting some books on the list because they were from the library, and on hold, ebooks, whatever. Thank the book gods, I got everything on my list and more!

I decided to get the thin, easy ones out of the way first, so for graphic novel, I read Black Panther: A Nation Under Our Feet Vol. 2 first. It’s fitting because the movie just came out this past weekend, and I most likely will be going to see it tomorrow night. (Tomorrow being Tuesday.) This was a graphic novel, I’ve already read Vol. 1. Vol. 2 is more of the same, I wasn’t wowed by it but I enjoyed it. I didn’t hate it, no. I liked it. I haven’t seen the movie, I will soon, but um… So I can’t really compare, but this book is basically about him trying to quell all of the uprisings of all the different tribes in Wakanda. Being a king, the king’s duties, what he has to do to deal with that, and not go against his morals. It did have one part where it had a few other black supers show up like Luke Cage, Storm, Misty, Manifold. I think that’s it. So that was nice to see, familiar faces. Well, “familiar.” If you like graphic novels, if you like Black Panther, read this. 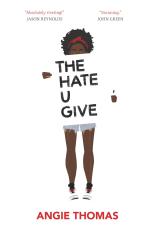 Next, hyped contemporary: THUG. Or The Hate U Give. This. Was. AMAZING. Really… Touching. This story focuses on 16-year-old Starr Carter, who lives in two worlds: her poor black neighborhood and a fancy suburban prep school that she attends. The uneasy balance between the two is destroyed when she sees her childhood best friend get shot by police and die. Soon after, his death became a national headline. Many called him a thug, drug dealer, gangbanger. It quickly became clear that the police had no interest in investigating his death so protests break out. Starr’s neighborhood becomes a war zone, many (buildings are) destroyed. All the people want to know: what really happened? The only person who can answer that is Starr. Will she speak up or not? This book does a really good job of exploring the conflict of what to do. Should she speak up? Should she not? If she speaks up, that could be beneficial, but it could also put her in danger. But if she doesn’t speak up, then… That goes unpunished, and she lives with that guilt. What to do? It’s really good. Now, I, as a white person, can never understand that struggle, because this… That’s a black struggle, it’s not a white struggle. So…I will never fully understand this but… This book does a really good job of conveying that conflict. This book is amazing. If you haven’t read it, READ IT. It’s SO good.

Next, dark/taboo contemporary book, I read The Serpent King. I… I went into this not really expecting anything, and wow I was surprised. This book was written with three different perspectives, alternating the chapters. First, Dill, the only son of a Pentecostal minister who encourages him to handle poisonous rattlesnakes. Dill is also bullied by people at school because of his father’s extreme faith and fall from grace because he was caught doing something bad and is now in jail. The other two are friends of Dill. Lydia who has a trendy fashion blog, which is her ticket out of the rural Tennessee town. Travis who is a nerd, he loves a book series that he’s really into, and is happy with that, he doesn’t need anything else. All of them are outcasts in a way. The story mainly focuses on Dill and his struggles. He feels stuck there. He doesn’t know what he wants. The only way he can make himself happy is his music and his feelings for Lydia, which he can’t admit. I’m not going any further. You need to read this. It’s really good. Something happens that I did not see coming, and… I wasn’t prepared for it. But yes, read it. 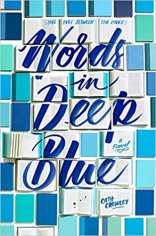 Next is a book that was recommended to me, by Kathy. And yes Kathy, thank you for recommending this! The book is Words in Deep Blue. Amazing. I need to get my own copy. This book alternates between the perspectives of Rachel and Henry. Henry’s family owns a bookstore. Rachel and Henry were best friends. Rachel moved away, but before she moved, she left a love letter in his favorite book in his family’s bookstore. She never heard from Henry, so she left it alone. Years later, Rachel moves back, and ends up working in the bookstore. Awkward things happen. I love this. I love that niche of books about books, and the stories that go with books. This is a romance story, kind of. But it doesn’t immediately feel like one, so that’s good. I like that. I really liked this book overall. Yes, read it. Yes.

I’m starting to take a little bit long with this video, so I’m going to get through it.

Next book is pink on the cover, I chose Geekerella. It counts! The pink in the center counts. This is an adorable book. It has a few flaws, problems with it, but in general, I really enjoyed reading this book. It’s obviously geeky. There are A LOT references to pop culture, fandoms, etc. It’s adorable. It follows Elle, short for Danielle, who has an obsession for a TV show, Starfield. They’re doing a reboot of it, she doesn’t like the choice of actors, she’s angry about it. She starts texting with someone, kind of falls in love, maybe. They both have an obsession with Starfield, they talk about it, lalala. It’s adorable! This is a really little thing, but the cover bothers me that it doesn’t really match the book’s description of the truck but it’s not really that important. If you enjoy fandoms, you enjoy geekdoom, a re-telling of Cinderella, this is a good read.

Next, a diverse contemporary book, Behold the Dreamers. When I first saw the title, I thought it was talking about the DREAM Act, but reading it, oh no it’s not. BUT it does focus on a family that moved from Limbe, Cameroon. They moved to Harlem, the father got a job as a chauffeur for a white family. It talks about their struggles with that job, their family trying to stay in New York. He doesn’t have his papers, he’s trying to get his papers, and so on. There is a lot going on in this book, but I don’t want to go too in-depth because I think you should read it without really knowing that much about it so you’re surprised by it. But this is a really good read. Yes, absolutely yes. 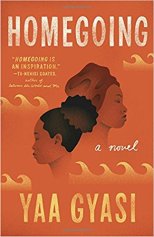 Next, your most recent contemporary you purchased/acquired, Homegoing. It has a very interesting way of telling the story. It follows two half-sisters from Ghana through eight generations of their family lines. One sister married an Englishman, and lived a life of comfort. The other one was taken and sold into slavery. The way the story is told, each chapter moves to a new person in the family line. So it’ll start with one sister, go to the other sister, back to the first sister’s child, then second sister’s child, and so on. Obviously, it jumps in time. It covers the Gold Coast slave trade, plantations in Mississippi, the American Civil War, Jazz Age Harlem, and modern-day United States. This was amazingly written. It was a little bit jarring because of a very different style of writing, jumping in time every time you get to a new chapter. But it was very fascinating, I enjoyed reading this. Even though a lot of awful things happened in it. I would recommend anyone read this, and I mean anyone. 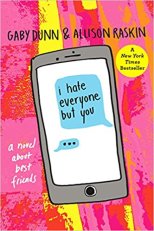 That’s it for seven books, BUT! Since I had a back-up book for pink on the cover, I decided why not go ahead and read it? I had time before the week was over, so I also read I Hate Everyone But You. It was written by two people, Gaby Dunn and Allison Raskin. They have a YouTube channel called Just Between Us. The book follows two people, Gen and Ava, who became best friends in high school. Both go off to college. Gen goes to New York for college. She talks about exploring herself, figuring out who she is as a queer person. Ava stays home, she’s straight, Jewish. The book is written in the format of texts and emails between them. So that took some getting used to that style of writing. I don’t really know Gaby and Allison that well, I do occasionally watch their JBU videos, I enjoy them, I do. This book was good, yes, but… I admit, I did watch Nirali’s, from firewordsparkler, review of IHEBU. And I have to say, I agree with her about this feeling like a fanfic, almost, of Gaby and Allison’s lives, what it would have been like if they’d met earlier. It is very obvious that these characters are based on Allison and Gaby, Ava and Gen. It was a little hard to separate the characters from them, because really, who the character is, what their identity is, and so on is the same as their real-life counterparts. So I just wish they had changed a little bit, just enough that it’s not THEM, cut and dried. Another thing that kind of bothered me, Nirali mentioned it, I agree. The emails and texts have no dates with them. Texts did have times, emails have none. Nothing wrong with that, but… It wasn’t clear that this was happening over only one semester until like, later, maybe two-thirds into the book. The only reason why it becomes obvious is because they’re talking about Halloween. So I just wish they had dates so we could see if they were messaging each other every day or if they were messaging every two, three days, or… Months in between, or… Just something to make it clearer what the timeline is, so we know this is happening over only four months, not a whole school year. All of that aside, I did enjoy this book. It’s good, just a different style that takes a bit getting used to.

Aaaand I’m finally finished! I was very happy this month with four books with black stories, especially during Black History Month! Have you read any of these, do you want to read any of these? Let me know in the comments below, and that’s it for today.

One thought on “Contemporary-a-thon Round 2 Wrap-up | BookTube”