Queer books! What more could you want?

Lately, I’ve been making an effort to read many more queer books. I now have a list of 13 books I would like to recommend for your reading. Part of the reason why I want to get this up is I’m hosting a readathon with Kathy Trithardt, and the theme is queer lit. We’ll be announcing details very soon, so keep an eye out for that. I will leave links here for that. Now, let’s get into the books!

Aristotle and Dante Discover the Secrets of the Universe. A Mexican-American coming-of-age story about two boys who have nothing in common, but as they spend more time together, they start to discover that they share something special. This story touches on struggles with identity, family, friendship. There’s struggle with being Latinx and being queer, how they deal with that. This is a very touching story, and it will make you feel the feels.

The Inexplicable Logic of My Life. This is another Mexican-American story written by Benjamin Alire Sáenz, but it isn’t connected with Ari and Dante. This story focuses more on familial relationships, rather than romantic. Sal has an adoptive gay father and a loving Mexican-American family. Big life-changing events happen, and it forces him and his best friend Samantha to confront tough topics of faith, loss, grief. Sal becomes lost, he no longer knows who he is, and he’s trying to figure it out. This is an amazing story about family and all the struggles and love that comes with it. 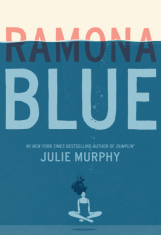 Ramona Blue. Ramona and her family live in a trailer in Eulogy, Mississippi, post-Katrina. With blue hair, she knows three things for sure: she likes girls, she’s very devoted to her family, and that she’s destined for greater things. But it’s made difficult with the fact that she juggles multiple jobs, deals with her flaky mom, well-meaning but ineffectual dad that makes her have to be the adult of the family, and her recently pregnant sister. Responsibility weighs heavy on her, so it’s a welcome distraction when her childhood friend, Freddie, is back in town. They spend a lot of time together, and Ramona realizes her feelings for Freddie have shifted. This causes confusion about her sexual identity, and makes her question what she knew about herself. Ramona Blue is a great story about family, discovering new things about yourself, and learning from mistakes. 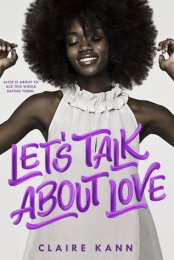 Let’s Talk About Love. Alice recently ended things with her girlfriend, because she couldn’t handle the fact that Alice is ace. So Alice decides that she’s done with dating, and will just enjoy her summer working at the library, marathoning all her favorite shows, and stuffing her face. But then the new worker at the library, Takumi, makes her feel feelings she thought she’d never have. She has to decide if she wants to take a risk on something that might not be reciprocated or understood. Okay, this book is AMAZING. The main character is an ace biromantic black woman. The love interest is Japanese. The representation in this—both racial and queer—is amazing, and done so well! It’s cute, fluffy, dorky, but it also confronts tough topics like sexism, racism—especially microaggressions, things people don’t understand about queer people. IT’S AMAZING.

Radio Silence. Frances is a study machine at her prep school, she has goals of getting into university, and nothing will stop her. But she also has a secret. She is obsessed with a podcast called Radio Silence, and she creates fanart. No one knows about this, and she must never let it out. One day, the creator of the podcast reaches out to her and asks her if she would be interested in doing actual art for the podcast. She’s thrilled and excited for this opportunity. Here’s the thing, no one knows who the creator is, they’re very secretive. At the same time, she meets Aled, a shy geek that lives close to her, and they develop a friendship together. Saying any more would spoil this book for you, but I will say this. GO READ IT. The queer rep in this is great, Frances herself is mixed-race and bisexual. Aled is demisexual. The main character of the podcast is someone who falls in love with people regardless of who they are. Just yes.

In Other Lands. The Borderlands aren’t like anywhere else. Technology? Bring it at your own risk. Elliott’s on a field trip with his classmates when he sees a wall no one else can. He’s given the opportunity to cross and go to school in the Borderlands. On his first day across the wall, Elliott thinks magic school is rubbish. There’s way more weaponry and fitness training than he expected. But he grows to love the Borderlands, which has elves, harpies, and mermaids! There’s one elf in particular that he’s into, Serene-Heart-in-the-Chaos-of-Battle. Oh, and her annoyingly likable human friend, Luke. Maybe magic school isn’t so bad. I love this book. It’s amazing, Elliott is so snarky and obnoxious, it’s great. I laughed several times reading this. Gender norms are flipped in this, there are bisexual and gay characters. 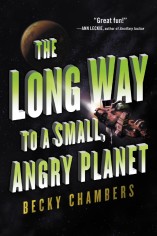 The Long Way to a Small, Angry Planet. Rosemary joins the crew of the Wayfarer for a chance to explore the galaxy, but more importantly, to get away from her past. The Wayfarer is a spaceship that tunnels wormholes to make space travel faster, and it has a very motley crew with diverse species. They’re given a job of a lifetime, but it has a lot of risks involved. For them to make it through, they all have to depend on each other, and Rosemary quickly learns how to trust, and that family isn’t necessarily so bad. Again, great queer rep! This has interspecies romance, people who are attracted to more than one thing, and it even touches on racism through the lens of speciesism.

By extension, I have to recommend A Closed and Common Orbit. It’s set in the same universe as LWSAP, but focuses on a different group of people. It’s set mostly on one world, and follows the adventures of an AI that was recently booted up and is figuring out who she is and how she fits in. 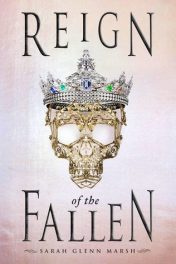 Reign of the Fallen. Odessa is one of Karthia’s master necromancers, and her job is raising the Dead who rule the kingdom of Karthia. She must retrieve them from the Deadlands, which is a dangerous shadowy world. There’s also a cost to being raised—the Dead must remain entirely shrouded, otherwise they’ll turn into deadly Shades, zombie-like monsters that destroy everything in their way. An uptick in attacks by Shades creates fear in Karthia among the citizens and the necromancers. Odessa fears that her necromancer magic might be what destroys Karthia for good. This is the start of what looks like to be a great series. The main character, Odessa, is bisexual, and there’s plenty of other queer people/people who are implied to be queer. Another great thing about this book is that there’s gender equality. There’s no silly stuff about women having to prove themselves capable, or anything of the sort. 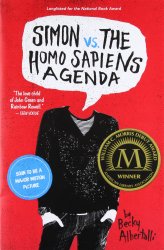 Simon vs. the Homo Sapiens Agenda. Do I even need to say more? Simon is a sixteen-year-old in high school, and he’s not-so-openly gay. He’s been emailing back and forth with Blue, an anonymous person who is in the closet and also goes to the same high school he does. One of his classmates discovers this, and blackmails Simon to help him get with someone he’s into. Things quickly get messy, and Simon is desperately trying to fix things before he hurts his friends, compromises himself, and destroys his shot at happiness with an adorable guy. Is the hype worth it? YES. Absolutely! This just makes me squee, read it! 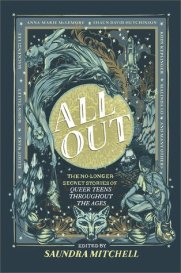 All Out: No-Longer Secret Stories of Queer Teens Throughout the Ages. Exactly what it sounds like. This is an anthology of various stories set through the centuries, in various countries. It includes a re-telling of Little Red Riding Hood set in war-torn 1870s Mexico featuring a trans soldier, forbidden love in a sixteenth-century Spanish covenant, an ace girl discovering her identity during the 1970s roller-disco scene, a re-telling of Robin Hood with a trans Merry Man. This was definitely a good anthology, had interesting twists of classic tales, and good diversity in both race and identities. Only one note, this is mostly set in North America and Europe. 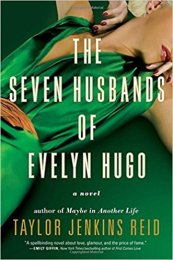 The Seven Husbands of Evelyn Hugo. Evelyn Hugo is a celebrity who’s had a glamorous and scandalous life, and who has never given an interview. She finally decides she’s ready to tell all, and chooses Monique Grant, a relatively unknown reporter, to write her story. No one understands why Monique, why now? But she’s determined to use this opportunity to improve her career. She listens to Evelyn as she tells the story of starting out in LA in the 1950s, leaving the show biz in the 80’s, all the drama along the way. Of course, this drama includes the seven husbands, and none of them were her greatest love in life. She talks about her ruthless ambition, unexpected friendships, a forbidden love. When the story finally catches up with the present day, it becomes clear why she chose Monique to tell the story. YES BISEXUAL ICON. Seriously, Evelyn is fantastic, it touches on death, grief, love, family, and so many topics. Definitely read it! 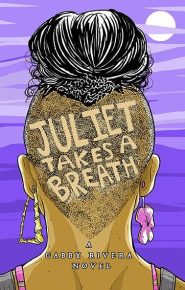 Juliet Takes a Breath. Juliet Milagros Palante is a queer Latina from the Bronx, on her way to Oregon after just coming out to her family. She doesn’t know if her mother will ever speak to her again, but she needs to figure herself out as a Puerto Rican lesbian, and she thinks Portland is how she will do that. In Portland, she’ll be interning for the author of her favorite book, a book that’s all about feminism and empowering women. Will Juliet be able to figure out all this over just a summer, or is she just running away from her problems? This story hits all the big things—queer identity, racial identity, how those intersect with who she is, white privilege, racial microaggressions, and so much more. The diversity in this is amazing—Latinx, Black, Asian, native, mixed-race, and more! I finished this very recently, and I’m still thinking about it. It’s great, and definitely read this if you are a queer person of color.

That’s it for my first Queer Lit Recs post! Let me know if you’ve read any of these books, and please leave any recommendations for queer books!

Hello there! I'm Rogan, a queer deaf guy who has a passion for leadership and advocacy. I create YouTube videos about a lot of different topics - being deaf, queer, reading, language, and whatever else interests me! View all posts by Rogan Shannon