I will come out with Queer History videos soon, don’t worry!

Welcome to my September books wrap up. Today, I have only six books, and three of those are from the same series.

The first book I read this month was the first book of that series, Crazy Rich Asians. The second book is China Rich Girlfriend. The third is Rich People Problems. I will talk about them as a whole, because… That’s the best way to do it. 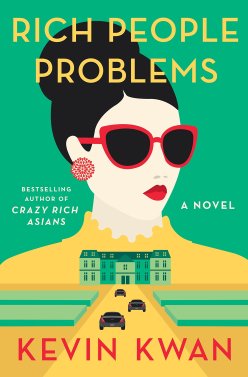 Yes, I know there are some people who don’t like this because–they don’t like it on principle because it’s about the 1% of the 1%. Which I understand. But… These books are written from, a lot from the perspective of a middle-class, average middle-class American, who’s dating a guy who is extremely rich. His family is just richer than God. A lot of this series will show how she deals with that, how she’s taken aback by his family being rich, and what? Figuring out how to navigate life as an one-percenter. It’s really fascinating, I learned a lot about that way of life from these books. One warning though, if you don’t like footnotes, you won’t enjoy reading these books. I’m not saying there’s a footnote on every page, no. But they do have a quite a few. The main reasons why they have footnotes: There’s a lot of non-English words in this. Also, sometimes it will have notes explaining the history of something. I really enjoyed that because I learned a little bit extra to the story. And it helped me understand some things too! I personally really enjoyed this series, and I would recommend it to anyone who wants to read it. I haven’t seen the movie, I may. Eventually.

The fourth book I read this month is Blackfish City. I first saw this book when I was at the LA library, and I just happened to be browsing books and that title caught my eye. That’s really cool, I like that, I read what it’s about, and put it on my list. I am glad I did. This story is set in a kind of apocalyptic future, where a lot of people live on floating cities now, because of the water rising. Climate change, all of that. And this focuses mostly in one–it is in one city, Qaanaaq. It’s really interesting because it follows the perspectives of several different characters. One is a woman who works as kind of an manager, PR person, for politics. Second is rich, an one-percenter. Third, a nonbinary person. That was a nice surprise. I wasn’t expecting that when I was reading. Oh, a nonbinary character! A main character too, so that’s fantastic. And probably a couple others. But overall, the few different perspectives gave us different glimpses into what life is like in that city for different classes. I don’t feel like I can adequately explain this book, but let’s say this. It makes a lot of comments on politics, global warming, classism, racial divides, a lot of big, heavy topics. But without overdoing it, in my opinion anyway. I really enjoyed this book.

Next book I read, let me tell you this first. I really enjoyed this book, I had no problems with the story itself. I did have a problem with them changing the title. The book I read was The Bookshop on the Corner. The original title is The Little Shop of Happy Ever After. (I like the original title.) The title was changed because it was originally published in Scotland, I believe. If not that, then the UK. This book is set in Scotland, specifically Kirrinfief. This story follows a woman who works as a librarian. But then her library has budget cuts, so it’s possible she could lose her job. She was thinking that she’s always had a dream of opening a bookshop, in a van, a traveling van. She decided, why not? She found a van in Scotland, she went to see and check it out, went ahead and bought it. And she got a lot of stock from the library because the library was downsizing, so getting rid of books. She “rescued” them. It’s kind of a fluffy, happy story of a person who moves to the country, rediscovers herself and her purpose in life, all that. I really enjoyed this book. It’s a great book if you just need something fluffy and mostly happy. I’m not going to say why I just said that, let’s just move on! 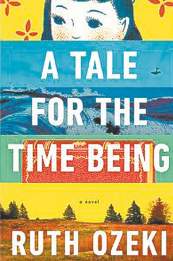 The sixth and final book I read this month, I’m not sure how to sign this title because… Reading the book, it actually has a double meaning. But I’ll just sign it as if I don’t know the double meaning. A Tale for the Time Being. Be warned, this book does talk about really heavy topics like suicide and bullying. So… Bullying as in serious physical abuse, so be aware of that reading this book. This story is a little bit… Odd. It happens through two perspectives. One perspective is of a woman, middle-age, who lives on an island somewhere in Washington state. One day, she discovers a diary of a 16, 15, 16-year-old Japanese girl. That’s the second perspective, the diary. So it will go from the diary to her experiencing the diary, and experiencing her life too. It’s very interesting. Also, wow. It is intense. Because… The diary, the girl is talking about her father having attempted suicide several times. And she is considering it herself too. It talks about Japanese culture, suicide and how it ties into Japanese culture. And… Bullying of her at school, all of the really awful things that she goes through. And… It’s a lot. I’m telling you, it’s a lot. But it’s very good. It’s well-done. Beyond that, I’m not sure I want to say more about this book. I think you should read it, see for yourself.

That’s it for September! Hopefully I read more books this month. We’ll see. Let me know if you’ve read any of these, or want to read any of them, leave it in the comments. Also, leave books you think I should read. I’m always adding to my list.

Before you go, I want to say a couple things really quick. First, I’m doing Inktober this month, so if you want to see what my drawings are this month, follow me on Instagram. Second thing, I will, like I said at the beginning of this video, I will be releasing Queer History videos soon… Hopefully. We’ll see how that goes. And… I am done for today.