Hello, I’m Rogan and welcome to VEDIM day 24! My original plan for this day was talking a little about Victoria Day in Canada. However, I didn’t realize that it actually happens on the last Monday preceding May 25, which was two days ago. So, instead I will do a post about Queen Victoria, because today’s her birthday. The reason why I made a little oops is because Victoria Day was originally celebrated on the Queen’s birthday, which is today. This day is for a public holiday, no school, kind of the same concept for Memorial Day in the US. Victoria Day has been observed since 1845. At least! That is a long time! 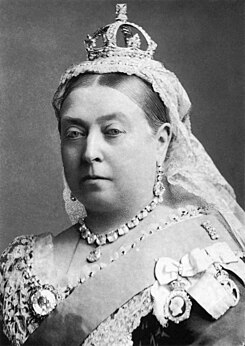 Alexandria Victoria of the House of Hanover was born May 24, 1819 and died January 22, 1901. She was the Queen of the United Kingdom of Great Britain and Ireland from June 20, 1837 to her death. She took the throne at 18 years old, because all of her father’s elder brothers died and had no legitimate children. At the time Queen Victoria took the throne, the UK had already established an constitutional monarchy. That meant the sovereign had very little direct political power. Privately, Victoria attempted to influence government policy and ministerial appointments. Publicly, she became a national icon associated with strict standards of personal morality. Victoria married her first cousin, Prince Albert of Saxe-Coburg and Gotha in 1840. Their nine children married into royal and noble families all over Europe, tying them together, and due to that she earned the sobriquet “the grandmother of Europe.” Her reign of 63 years and 7 months was longer than any of her predecessors and is known as the Victorian Era. It was a period of industrial, cultural, political, scientific, and military change within the UK. It was also marked by a great expansion of the British Empire. She was the last British monarch of the House of Hanover. Her son and successor, Edward VII, belonged to the House of Saxe-Coburg and Gotha, the line of his father. There’s a lot of history about that one person. She lived for a long time, and was queen for a LONG time.

I would recommend you read her Wikipedia page and learn more about her. Especially when she influenced the Victorian Era so much! So that’s it for today. I hope you enjoyed that, and learned something about Queen Victoria. Thanks for reading, see you tomorrow.